Today we printed the famous hinged dissection called the Haberdasher's Puzzle from Henry Dudeney, who found a way to cut an equilateral triangle into four pieces that reassemble into a square. Dudeney's solution had an additional property, which is that the pieces could be hinged so as to swing from one form to the other. It's a beautiful construction and I was recently reminded of it by a tweet from WWMGT ("What Would Martin Gardner Tweet?"). Here are seven copies of the model, laid out so you can see the triangle turn into a square, and vice-versa: 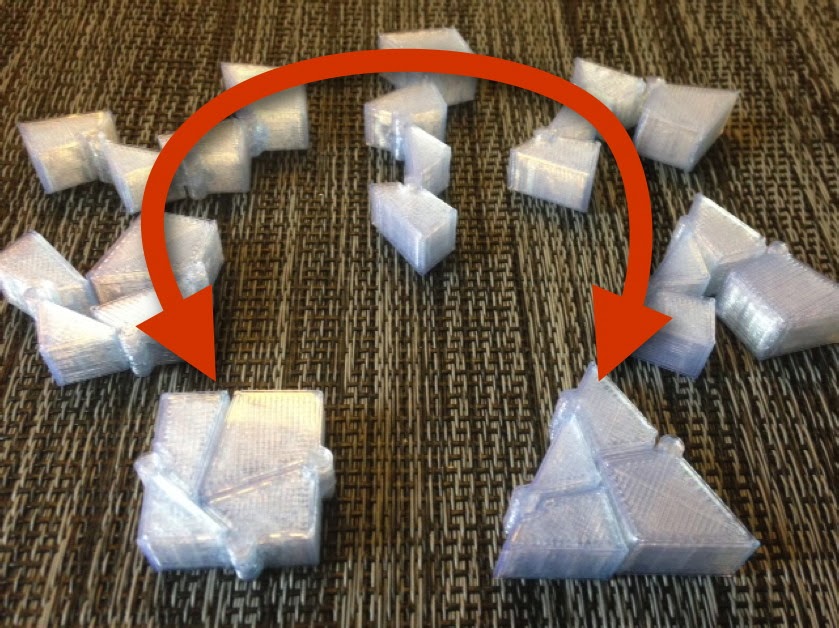 C is at home for a(nother!) snow day with his friend E, who was kind enough to demonstrate how the Triangle-Square works in this short video.

Settings: MakerWare .3mm/low on a Replicator 2 with linear infill (just because it looks nicer when using translucent filament), in about 10 minutes, with no raft and no support.  The model prints in *one piece*, hinges and all.

Technical notes: This is the model we were working on in Friday's post about failing. It was created in OpenSCAD by modifying the code for our Fidget cube from Day 146. When I first started this project, I thought it would be a simple modification. Then I realized I didn't have coordinates for the dissection of the triangle. After some searching I found an explicit construction with coordinates in coordinates the MapleSoft article Animation of Dudeney's Dissection Transforming an Equilateral Triangle to a Square by Mark Meyerson of the U.S. Naval Academy. After some trial and error I got this worked into the following coordinates for points A, B, C, E, F, P, Q, R, and S in OpenSCAD code (where s is a scaling factor with default value 35mm):

The second major problem was that the hinges needed to be angled and oriented to fit on non-square pieces, and also that some of the hinges needed to attach to angles that were much less than 90 degrees. These acute-angle hinges were unstable and didn't snap apart correctly after printing, so I had to add some stabilizing connectors and then some holes in opposite pieces to accommodate those connectors so the pieces could still fold flush to each other. What I hoped would be easily generalizable code that would work for any hinged dissection with given vertices and hinge locations quickly turned into a mess of one-use angles and hacks to make things close up correctly. But in the end we worked it all out, if messily. Perhaps in the future we'll make a more generalized OpenSCAD code for these constructions, but for today we are content just to be able to turn a triangle into a square and back again. And again, and again, and again.

UPDATE: This model got a shout-out in the post Using Manipulatives for a fun twist on Dan Meyer's geometry problem on the mikesmathpage blog. Nice ideas for how to use the Haberdasher triangle-square to get kids thinking openly about mathematics!
Posted by mathgrrl at 9:52 AM