Today we finally broke out the 3-Doodler 3D-printing "pen". Calvin loves making tall towers of squiggles. This one broke the record! 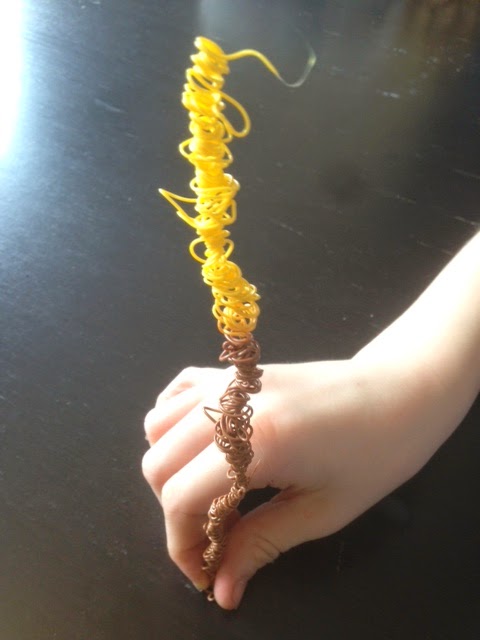 Technical notes, Yaya-comparison flavor: We also have the Yaya 3D Pen, which is a nearly identical knockoff to the 3-Doodler except that it seems to be (a) lower quality and (b) more expensive. On the other hand it shipped quickly and works pretty much the same way with similar results. One big difference is that with the Yaya you have to withdraw the filament by running the motor backwards, and you can't let the end of the filament disappear into the pen. In contrast, the 3-Doodler lets you just keep running the filament through the pen even when it runs out, which means that you can feed in new filament right behind the old. Calvin loves this because you can do a color-change with a funky transitional color along the way. The 3-Doodler also seems a little safer and has a cover for the nozzle that keeps young fingers from accidentally touching the hot nozzle. You can also switch between ABS and PLA with the 3-Doodler and the packaging and filament collection is much nicer.
Posted by mathgrrl at 8:32 PM No comments: