Today we printed a rather upsetting shape called the Szilassi polyhedron, a model by richgain on Thingiverse. (Day two of our two-day richgain series!) The Szilassi polyhedron has seven hexagonal faces, but the hexagons are not regular, and even worse, aren't even convex. However, these faces have a special property: every pair of faces shares an edge. Here is the crazy thing: 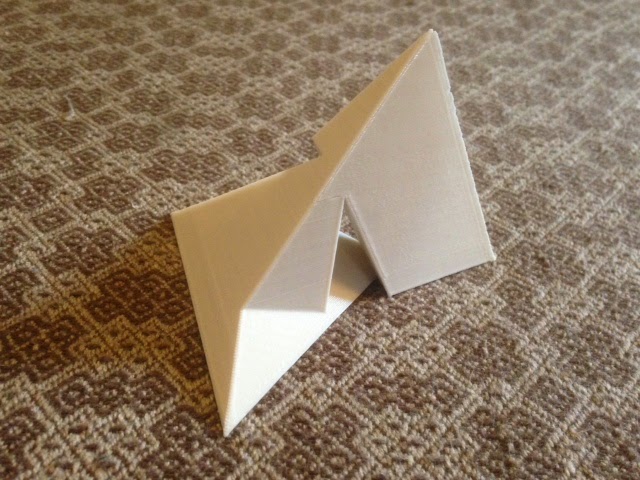 Settings: MakerWare .3mm/low on a Replicator 2, with raft but no support.

Technical notes, faces flavor: Being used to nice, symmetrical, regular polyhedra, I find it difficult to wrap my mind around this nasty awful thing. Luckily, there is a nice picture of the seven faces at minortriad.com. Pro tip: Don't try to color the faces in with a sharpie because it will look like crap. Sharpie bleeds through the layers of the PLA to the other faces. I did know that this would happen and yet I tried to Sharpie up my model anyway. Sigh. If you want to paint the model that would probably be fine, but only if you haven't already ruined your model with Sharpies and only if you're good at painting, which I'm not.

Technical notes, math flavor: Each one of the seven non-regular non-convex hexagonal faces of the Szilassi polyhedron meets every other face at some edge. This means that if you want to color each face so that no two faces of the same color ever meet, then you must use at least seven colors; all seven of the hexagonal faces need to be different colors, since all of the faces meet every other face at some edge. Topologically the Szilassi polyhedron is equivalent to a torus (donut-like) shape. This means that there is some subdivision of the surface of a torus into regions so that seven colors are needed in order to color the regions properly, that is, without two regions of the same color ever touching. In fact, according to the Seven Color Theorem, seven is the largest number of colors that would ever be needed to properly color a subdivided torus, so the nasty Szilassi polyhedron is an example of a worst-case-scenario for torus-coloring!
Posted by mathgrrl at 5:26 PM